A New Hamlet Rides in with Knighthorse

Every summer, the two-person Knighthorse Theatre Company performs the feat of producing entire Shakespeare plays on a bare stage at the Baker’s Field Tent throughout July and August. 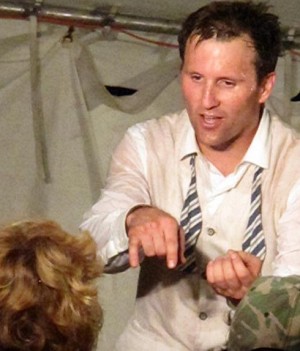 In these original adaptations, Ty and Amy Lemerande streamline the minor action, leaving the full grist of the story and poetry of the monologues fully intact. No period sets and no post-modern tricks.

Between them, the wife-and-husband team performs all major roles and perhaps another handful of minor characters. They walk up to audience members and deliver whole monologues as if in private conversation. The result is like having your Shakespeare served blood rare.

Kicking off this season at the Baker’s Field Tent, Ty Lemerande performed a new adaptation of a Shakespeare play without Amy. She had just given birth to their first child – a baby boy named Declan Thomas.  Anyone else would have excused himself or downsized to, say, one of the history plays. Not the Lemerandes. They had prepared nothing less than Hamlet.

The show began with Horatio paying honor to the memory of the King and then being spooked by the visitation of the Ghost. Ty went on to enact the entire story of patriarchal upset, tragic paradox, family horror, and love gone haywire.

Ty plays the parts of Hamlet; King Hamlet’s Ghost, the murdered King; Claudius, the new King; Polonius; Horatio and a few others. He also played Gertrude and Ophelia and then a sprinkling of minor characters, including the Gravediggers and the Players, who perform the play within the play at Elsinore.

Hamlet was dressed at the outset with a bowtie, suspenders, sweater, vest and reading glasses. In the final scene, the glasses thrown, bowtie undone, the sweater off, the vest open, the shirt drenched in sweat, already fatally stabbed, he kills his uncle.

In reading the play, Hamlet’s cleverness can obscure his horrible predicament. Not so here. In Ty’s enactment, you can feel the tortured state of mind. Before the audience’s eyes, Hamlet was transformed from the bookish and snarky son to the enraged and tortured prodigal son of a rotten Denmark.

Ty expressed all the quicksilver changes of mood and also swings between feigned and real madness. He lends Hamlet a wealth of conflicting emotions. He changes from snide intellectual to avenging angel, from gallant knight to mama’s boy, from shrewd actor to madman. You feel his rage, his confusion, the sense of the filial loyalty and Oedipal angst being turned topsy-turvy and, finally, torn asunder.

To ratchet things up further, Ty is able to convey the complicity of the Hamlet family in Ophelia’s death. He places particular emphasis on the graveyard scene leading up to Ophelia’s funeral, at which point both brother and boyfriend jump into the grave. In his intense acting, Ty has the audience stare mortality in the face without so much as a shovel or dirt.

His treatment of Ophelia, the Ghost, Claudius, Laertes, Polonius, and Gertrude are all subtle and mesmerizing. Rather than economize, for example, and make Ophelia mad to begin with, he treats us with a strong and willful woman. Her madness in the end, evidenced in her bawdy singing through several middle scenes, is all the more believable due to the vise grip of her own tragic dilemma. To each character, even Rosencrantz, he lends a riveting and breathless performance.