‘Touched by War’ Onstage and Off

Tyrus “Ty” Lemerande, local Shakespearean actor and square dance emcee, received last October the e-mail from the U.S. Navy calling him to active duty as part of the his contract as a reserve officer. 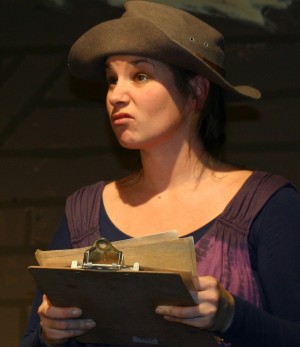 “It’s a call that they say is not an ‘if’ but a ‘when’,” says his acting partner and wife Amy McLaughlin Lemerande.  “We don’t have too many other options.”

After that call to duty, the sole members of Knighthorse Theatre Company decided that instead of canceling their fifth season of Free Shakespeare in Wellfleet, they would condense 70 pages of Shakespeare into two plays that feature Shakespeare’s women that McLaughlin would take on solo.  McLaughlin performs “Touched by War” and “Bound by Love” on Monday and Tuesday nights, respectively, at 7 p.m. through July and August at the Baker’s Field Tent across from Mayo Beach in Wellfleet.

In these intense and powerful pieces, McLaughlin says she has come into her own as an actress.  Still, it isn’t easy to have a husband on the other side of the world.

The couple’s son, Declan, just celebrated his second birthday.  Mother and son communicate daily with Lemerande, who is stationed at a communications center in Kabul, Afghanistan.  They use Skype on their computer or on McLaughlin’s cell phone.  “Declan is doing fine, considering,” says McLaughlin, her voice trailing off.  “He kisses the green light on the computer.  And I definitely think at times that Declan thinks his daddy lives in the iPhone.”

The Lemerandes met in 2002 soon after being cast with the Shenandoah Shakespeare Company.  They acted in three shows together: she played Trinculo the clown while Lemerande played Ferdinand in “The Tempest;” she was Kate to his Lucentio in “Taming of the Shrew;” and Virgilia opposite Lemerande’s Coriolanus.

They married in 2003, after Lemerande proposed at a family Christmas party in front of 60 relatives, dropping to his knee in his white Navy uniform.

With Knighthorse, a non-profit traveling theatre company, they have acted opposite each other for 10 years in nearly all of Shakespeare’s plays.  They exchange gender roles, a Yorick skull and rapier belts, as they juggle the demands of Lemerande’s Navy career and a two-year-old.  All the while, they travel around the country, bringing Shakespeare to diverse audiences in schools, community centers, theaters and tents.

While McLaughlin earned her MFA in theater at Trinity Repertory, Lemerande’s chops in Shakespeare were earned at the Naval Academy.  After he injured his knee playing pick-up basketball, Lemerande knew he wouldn’t be flying airplanes and became a communications officer (he currently holds the rank of commander).  He started performing in the theater as well, and developed “Henry V” among a crowd where the meaning of the “Band of Brothers”  line in Henry V’s famous St. Crispin’s Day speech, delivered on the field of battle, hits closest to home.  He later wrote a monograph on “Henry V” to complete his MFA.  Since he is in communications, Lemerande is stationed in a relatively safe office building in Kabul.  “It’s where everyone goes when there’s a bomb scare,” explains McLaughlin.  “And when the hotel was bombed, he didn’t experience any of the violence.  Or at least that’s what he told me.”

From their first meeting through today’s Skype session, McLaughlin says of her romance with her husband, “it’s like thunderbolts.”  She channels her love for Lemerande as well as her role as the matriarch of the family in Shakespeare.  Over the course of two nights, McLaughlin performs scenes from eight plays and Sonnet 27.  She plays up to four characters, both men and women, in one scene.  For Portia in “Merchant of Venice” and for Viola in “Twelfth Night,” she plays women in disguise as men. In “Touched by War,” she starts with “Henry V” and the famous prologue describing what the audience must do to imagine thousands of troops, horses and the blood of battle: “O for a muse of fire, that would/ The brightest heaven of invention./ A kingdom for a stage, princes to act/ and monarchs to behold the swelling scene.”

It seems to sum up the creative passion that marks their lives.