It was well into his one-man performance of Hamlet that Ty Lemerande launched into the sword fight between Laertes (his left hand) and the titular Danish prince (his right). While this style of acting may sound overly spare, the 300 troops in the audience rose in thunderous applause when Lemerande finished. Stationed in Kabul, Afghanistan, they could appreciate a good battle — as could Lemerande, who wasn’t just a touring actor, but an active Navy Reserve commander stationed with them. 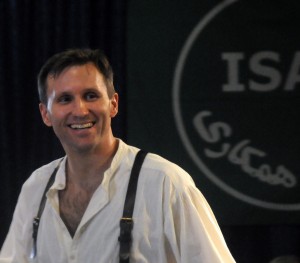 The 42-year-old Scituate resident has long been an incongruous combo of soldier and theater geek. He first caught the acting bug in high school, carrying it with him to the Naval Academy in Annapolis. After more than a decade in the Navy, he left in 1999 to pursue a master’s in theater from Penn State. Three years after that, he met Dorchester native Amy McLaughlin, who was in his acting troupe.

Together they became the Knighthorse Theatre Company, a two-person group that brings performances and acting classes to schools all over the U.S. The two married and were inseparable until Lemerande, who had joined the Navy Reserve, was called to active duty. In her husband’s absence, Amy performed solo, while Lemerande did Hamlet and a second show overseas.

Lemerande spoke to us by phone from Kabul in November as he was anticipating a return to Massachusetts by the new year. Back in Afghanistan, he’d garnered some high-ranking fans: After watching both performances, U.S. Army Brigadier General Edward F. Dorman III e-mailed him, saying, “Your superb performances not only enhanced morale and esprit de corps, but also brought us a touch of class and sophistication.”

For Lemerande, the highlight was performing Henry V’s “band of brothers” speech, which extols the strength of an army built on honor and loyalty (see inset). “It feels different when you perform it for men and women in uniform,” he says. “They’ve made that commitment.”