It isn’t easy for teenagers to read the work of William Shakespeare and understand it.  They can pour over pages of the 400-year-old verse for hours and still make no sense of it.  Amy McLaughlin can relate.  The 1993 Marshfield High School graduate said the grades she earned while studying Shakespeare in high school were less than stellar. 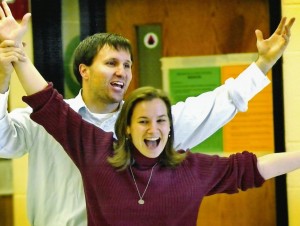 “Shakespeare was meant to be heard and seen, not read,” McLaughlin said.

With that in mind, McLaughlin and her husband-to-be, Tyrus Lemerande, founded the nonprofit Knighthorse Theatre Company.  The traveling two-person troupe performs condensed versions of Shakespeare’s classic plays for students in middle, high school and college.

Last week, the couple, both of whom hold master’s degrees in acting and theatre arts, traveled to Marshfield High School, where Lemerande performed a one-man version of Henry V.

They also perform two-person versions of several other Shakespeare plays.

Although his performance condenses the play, Lemerande stressed that he isn’t offering students a facile version of Henry V.

“It’s more about using Henry V as a vehicle to get kids excited about Shakespeare in general and to spark discussion,” he said.

The Knighthorse Theatre Company travels from school to school, helping students get a firm grasp on Shakespeare’s language.  Lemerande and McLaughlin say they try to open a window into the playwright’s work in hopes that it will enable the students to enjoy the play not only as literature but as entertainment.