How often have we observed a couple and secretly (or not so secretly) commented, “What does he/she see in her/him?”

But not this time!  The Capers’ April in-house program presented at the Mashpee Senior Center introduced us to a couple who were attractive and winsome.  The phrase, “Love at first sight” came to mind as well as a quote from King Lear: “She is herself a dowry.” 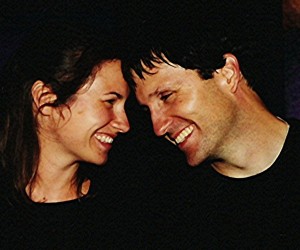 And what did this delightful couple do?  They presented a program called the Shakespearean Jukebox.  Lest the Shakespeare part of the title scare anyone; hold on!  Don’t let memories of negative school assignments prejudice you.

Amy McLaughlin and her husband of four years, Tyrus Lemerande, had us encircling them on three sides so that we, the audience, could enjoy an intimate, shared, dramatic experience.  A list of Shakespeare’s 38 plays was distributed and we called out our favorites.  From these, choice scenes were acted out.

We were delighted to witness scenes from Richard II, Julius Caesar, Antony and Cleopatra, and The Tempest.  But the most active of the [stagings] was The Taming of the Shrew.  If the mayhem that Mr. Lemerande and Ms. McLaughlin endured wouldn’t turn on a class of school kids, nothing would.

One could entitle the program, “The Best of Shakespeare.”  You listen and watch the presentation of plum orations and soliloquies as one listens to favorite arias from well-known operas, but add to that the interaction with the audience.  Even my usually reticent husband not only enjoyed having a line as [Kate’s father] Baptista but came home and said he should have added one more line.  He’s bitten!  Isn’t that called “padding the script?”

Shakespeare said, “They do not love that do not show their love.”  And we have to say that Ms. McLaughlin and Mr. Lemerande definitely showed their love in their art.  There wasn’t a negative comment possible by the members.