If Shakespeare’s Romeo and Juliet had lived happily ever they would have founded the Knighthorse Theatre Company. 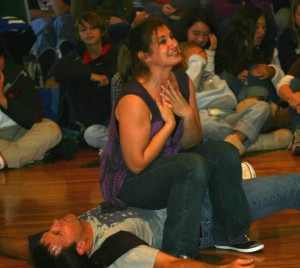 In an ending contrary to the Bard’s tragic tales, that is precisely what happened when Tyrus Lemerande, a Californian, met Amy McLaughlin of Marshfield.  After completing master’s degrees in fine arts in theatre—his from Penn State and hers from the Trinity Rep Conservatory—fate brought them to Shenandoah Shakespeare Express, a traveling acting troupe based in Virginia  Lemerande and McLaughlin were cast as Romeo and Juliet and a true-to-life love story ensued.  The former football standout and U.S. Naval Reserve Lieutenant Commander married the professional actress shortly thereafter.

But even before they tied the knot, the couple bound themselves to each other in the summer of 2003 by founding Knighthorse Theatre Company.  The couple wanted to spend more time acting and less time with the bureaucracy of a large reparatory company.

“We want the audience to see what we see,” Tyrus said.  “Shakespeare’s themes are archetypical and they are as relevant today as they were in the 1500s.  We work hard to understand him, and our goal is to help our audience understand.”

The traveling troupe performs throughout theUnited States as well as in venues overseas.  School systems, typically high schools and colleges, hire Knighthorse to supplement their curriculum.  In classroom workshops, they work with students to enlighten specific plays.

The company’s Shakespearean Jukebox is a frequently requested performance.  In it, the audience requests a particular play and Ty and Amy spring into action, moments later the Bard’s words and themes come to life.  It is like a jukebox in that they move from scene to scene, from work to work, in an impressive display of Bardology.

Knighthorse’s minimalist stage, lighting and costume design, is a departure from the big budgets typically associated with Shakespearean products.  The couple travels with a few period costumes and a trunk of props.  Performances are reminiscent of the Total Theater tradition, initiated in classic Greek theater and advanced by Richard Wagner; the actors are completely immersed with their audience.  It’s common to see them step off the stage and into the crowd, to request audience participation, or to escort brave volunteers onto their stage.  In a nutshell, they are the proverbial one-man (and one-woman) band.

Morgan Wolfe, a Cape Cod elementary school student, experienced Shakespeare for the first time at Knighthorse’s performance overlooking Mayo Beach.  “They were funny, had lots of energy, and I couldn’t wait to see what came next,” said Wolfe.  “They picked me out of the crowd to remind Romeo that he needed to return to Juliet.  I was nervous and excited, all at the same time.”

Becky Rosenberg, the Director of the Wellfleet Recreation Department, says “‘Free Shakespeare on the Beach’ is our biggest event of the year.  Ty and Amy play to the biggest crowds of the summer.”

For centuries, Shakespeare has frustrated students young and old alike.  If you’re one of them, check out a Knighthorse Theatre Company production.  Odds are you’ll dig out your dusty textbooks and read with renewed vigor.  It goes without saying that a Knighthorse production guarantees you won’t need Cliff’s Notes.