[Tyrus Lemerande’s] one-man production of Henry V is a moving, visceral adaptation with the best fight scene I’ve witnessed. There’s no need for any other actors: he recreates the melee around him, the chaos, the gore; you can see heads rolling, you can smell the carnage. 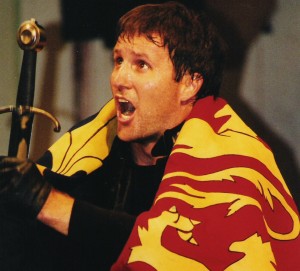 Lemerande has presence and charisma but, at the same time, manages to render Henry a humane king. He says that he shares Henry’s ideals of honor, duty and an unwavering faith in God, and he certainly puts every part of himself into the character.

The stage is very small and, as a result, this is a very intimate production. Lemerande plays on this by giving the audience the impression that they too are characters in the play. It is a tactile performance and although the lighting initially seems too bright, it has a function, which is to give the audience the impression that this drama is part of the space they inhabit. There is no boundary between actor and audience, which is what makes this performance so vivid.  A phenomenal performance.